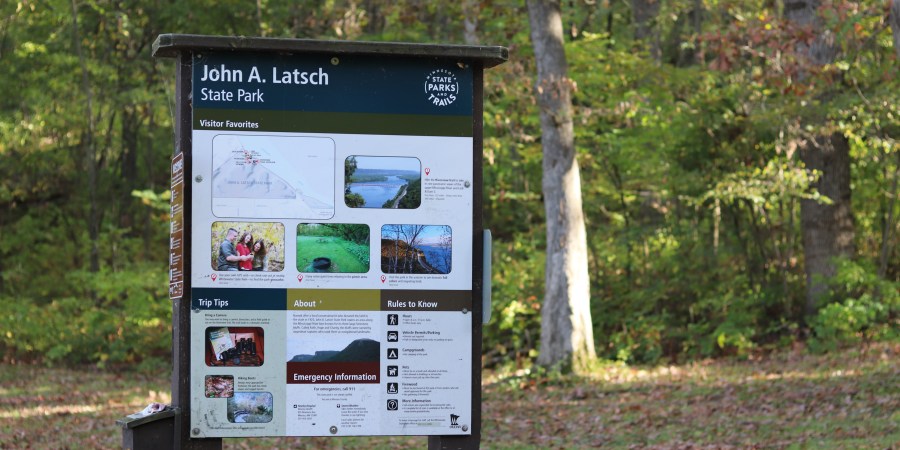 If you are looking for a tough (but quick) hike in southern Minnesota, look no further than John A. Latsch State Park.

Located just 12 miles northwest of Winona, the roadside park functions primarily as a wayside on U.S. Route 61, which runs between the Mississippi River and the base of three steep bluffs.

The bluffs rise 500 feet above the river named Mount Faith, Mount Hope, and Mount Charity, named by steamboat captains, who used them as landmarks.

This area was a logging town with its steamboat landing in the 1850s, supplying lumber to sawmills in newly founded Winona.

An informational sign at the bottom of a set of wooden steps marks the trailhead of the Riverview Trail, the only marked trail that runs through the park.

The steep, 0.5-mile trail climbs 450 feet to the top of Mount Charity, offering a panoramic view of the Mississippi River Valley including Lock and Dam No. 5 to the south. While I came to see the fall foliage, the 592 space wooden steps to the top are no joke. Come prepared for a workout.

John A. Latsch State Park was named for a Winona businessman who loved fishing beneath these three bluffs.

He purchased some of the property and, along with an adjacent landowner, donated 350 acres for a state park in 1925.

Latsch was a lifelong patron of conservation; Whitewater State Park and Wisconsin’s Perrot State Park both grew out of other parcels he donated.

Do you have a go-to, off-the-beaten-path hiking spot?