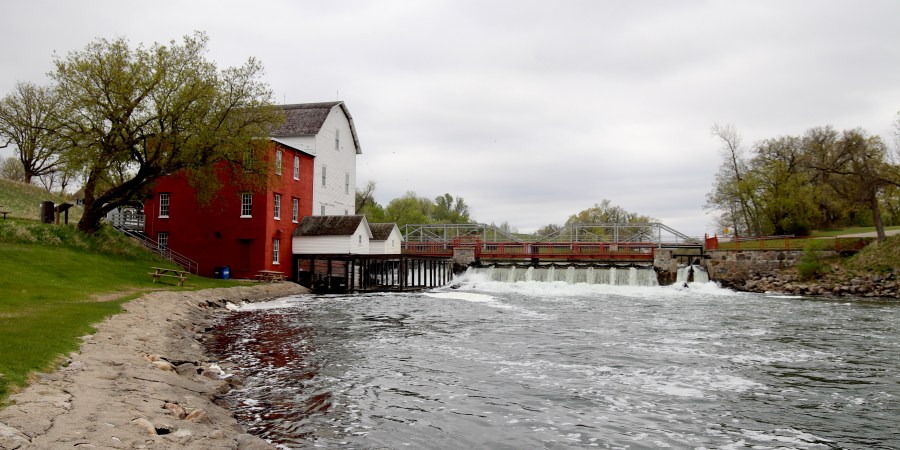 The Minnesota Governor’s Fishing Opener is a unique time to explore areas that otherwise I may have missed. Enter, the Historic Phelps Mill and County Park.

The beautifully preserved mill was initially built 1888–1889, along with a wooden dam, by William E. Thomas, a local entrepreneur who owned a flour and feed business in Fergus Falls.

The mill itself was built by Royal Powers, who built and framed the mill without using blueprints.

The mill opened in October 1889 and was designed to produce 60 to 75 barrels of flour per day.

Known as “The Maine Roller Mills” and made patent, straight, bakers and low grade flours under such names as Gold Foil Patent, Silver Leaf Fancy, and Bakers Choice.

It was very successful during its initial several years of operation.

At the height of the wheat grinding season, 25-35 wagons loaded with sacks of wheat would line up outside the mill.

Thomas built a bunkhouse for overnight guests and a barn for stabling horses.

A general store also was established in the area and is still in operation.

As technology progressed in the early 1900s, as did the decline for the need for rural milling.

In 1965 Otter Tail County purchased the mill and surrounding land as a recreational site.

Today, the mill is part of the Phelps Mill Historic District, which also includes the general store and an Italianate miller’s house.

If you are in the area, stop in to see the beautifully preserved mill, take a self-guided tour, hoof the historic pedestrian bridge, or fish along the banks of the Otter Tail River.

This post was sponsored by Visit Ottertail County but all opinions are my own.