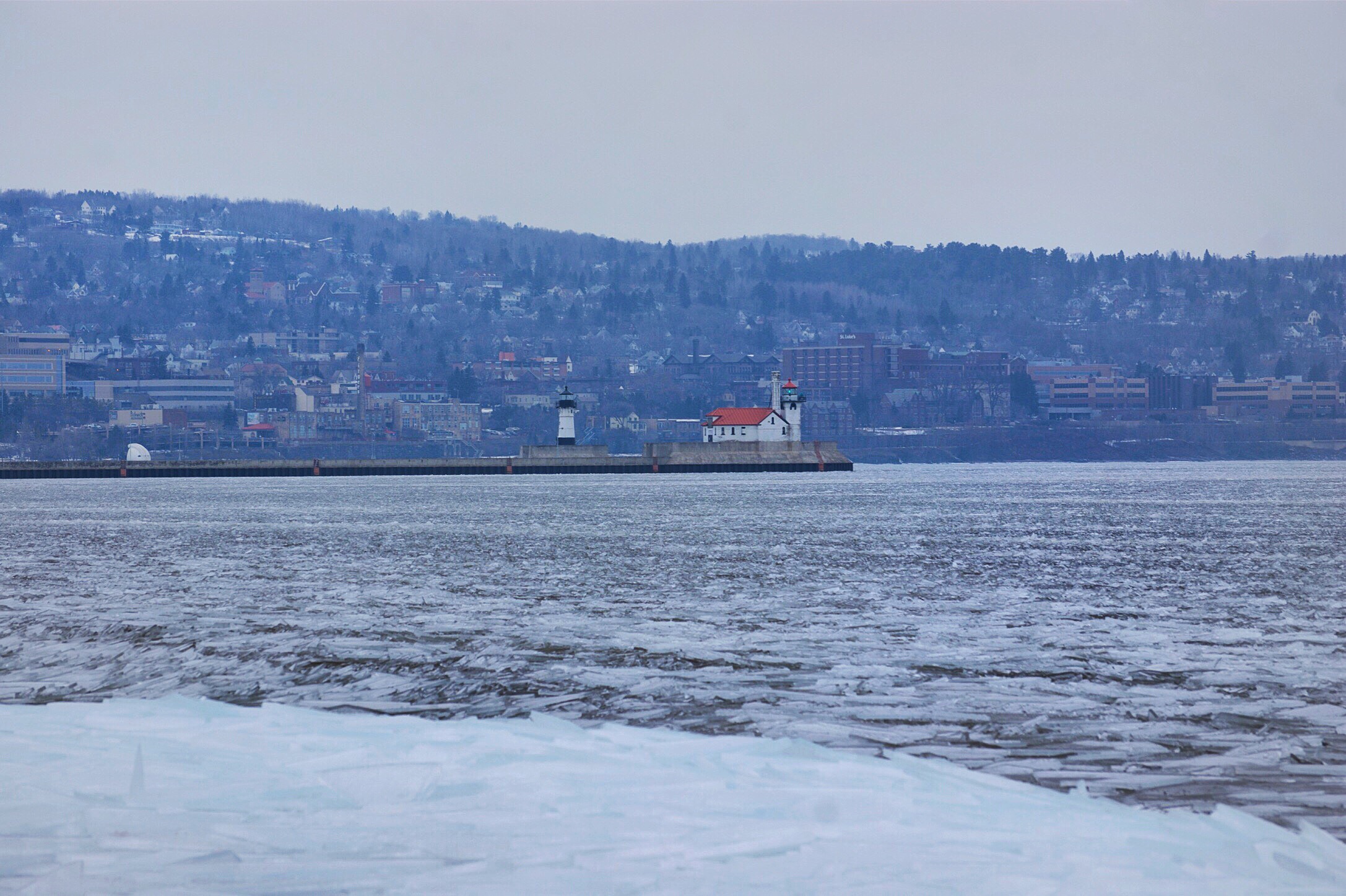 Most people don’t think of Duluth as a beach town. Home to Minnesota Point, also called Park Point, the longest freshwater sand bar in the world. From where I stand, although covered in ice, the beach is located at the western tip of Lake Superior. Created by silt and sand deposition from the Nemadji and St. Louis River, it was established as the border between Wisconsin and Minnesota. Duluth and Superior rivaled and grew on opposite banks. In the early 1850’s, there was only a single opening in the sand bar on the Wisconsin side, that became known as the Superior Entry. As the Duluth-Superior harbor grew, Minnesota dug their own and the Duluth Ship Canal was born. Because of this, Minnesota Point is technically an island, connected to Canal Park by the Aerial Lift Bridge.  The Point separates Lake Superior from Superior Bay and the Duluth Harbor Basin, creating a natural breakwater. Together, Minnesota Point and Wisconsin Point are about 10 miles long.

The “Park” on Park Point was developed in the 1930’s. Running along Minnesota Avenue, Park Point is also home to 6 miles of beach that has always been open to the public. A popular summer destination for swimming and recreation, you can also hike and run on a two-mile trail or boat-watch. For the history aficionados, you can also visit the Minnesota Point Lighthouse, the first lighthouse built in the state. Now in ruins, the  lighthouse was built between 1855 and 1858. It was only used for about 30 years and then extinguished.  In 1975 the lighthouse was designated a national historic monument and the base serves as the zero point for survey maps of Lake Superior.

Park Point also includes the remnants of an old growth forest that was filled with Tamarack and White Pine. All were part of the great northern forest which was the foundation of the timber and lumber industries at the end of the 19th Century. Some of the local mansions in the Duluth area were built with that very timber.  Speaking of the logging and lumbering history… For those who are Paul Bunyan folklore enthusiasts like myself, this is for you:

“You must remember that this was Paul Bunyan country long before Duluth was settled. Paul logged in the areas West and North of the bay, near the Amnicon River in Northern Wisconsin. To get to Amnicon, on the South Shore of Lake Superior, he had to walk many miles to Fond du Lac and cross the river, then march back along the South Shore. In those days, trees touched the clouds. He tired of the walk and cut a tree down, had Babe drag it to the shore, stood it on end and into the lake. Next he walked to Fond du Lac and back to Amnicon for the last time. There he cut another log and again had Babe drag it to the lake. He raised it in the air and dropped it into the water just as he had the other. He miscalculated the distance and the two ends were several hundred feet apart. Still, it didn’t seem to matter much because he had quite a stride and could jump vast distances. That is how the Superior Entry got in the middle of the sand bar. Wasn’t long before the sand and silt started to pile up and Minnesota Point was born. That old tree is probably still down there. Some claim that when the canal was dug they had to cut through several yards of wood at the bottom.”