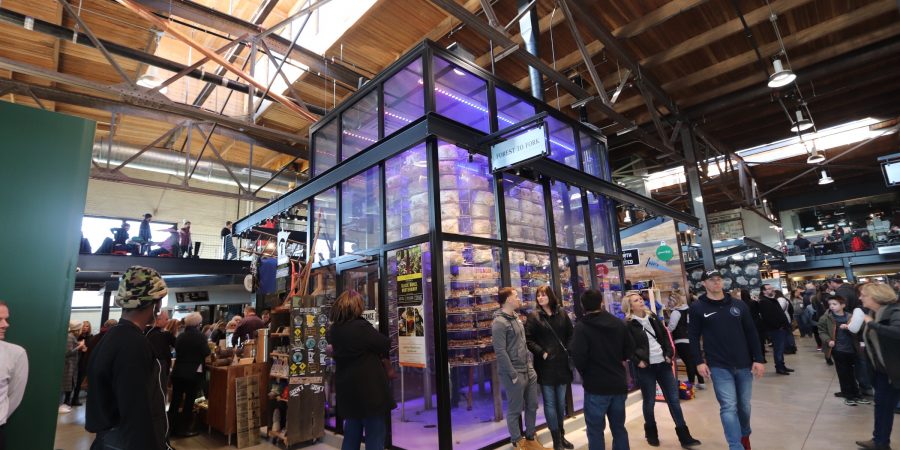 You may be hard-pressed to find someone in the Twin Cities who hasn’t heard of Keg and Case Market in St. Paul’s West 7th neighborhood.

Housed in the Schmidt Brewery, the gourmet food and vendor hall has already accumulated a laundry list of accolades.

The food hall boasts over 33,000 square feet with more than 20 vendors.

History on the building: The Stahlmann family founded the first brewery in a natural cave on the site in 1855 as the Cave Brewery.

The location was used for multiple businesses before becoming the Schmidt Brewery. Jacob Schmidt, a successful St. Paul brewer who had previously worked as Hamm Brewery’s master brewer, purchased the site in 1901.

Later that year the brewery was incorporated as the Jacob Schmidt Brewing Company and a new plant and malt house were erected next to the existing structures.

Schmidt’s became the 7th largest brewery in the country by 1936. Schmidt ceased production in 1990.

The Minnesota Brewing Company bought the structure in 1991, shutting down for good in 2002. The complex operated as a brewery under various owners until 2002. It then began producing ethanol for Gopher State until they closed again in 2004.

The bottle and brew houses were converted in 2012 into the Schmidt Artist Lofts and the iconic Schmidt’s sign was relit in 2014.

Fast forward to today, Keg and Case was created by developer Craig Cohen. He bought the building in 2014 and preserved and restored much of its original interior from the 1920s and 30s.

Swoon-worthy stops inside; Barkley’s Bistro where you can find healthy treats for your furry favorites.

Bogart’s Doughnuts Co. is the place to go for scratch cake doughnuts. Clutch Brewing is located on the mezzanine level.

Croix Valley Foods is a great place to go to for barbecue sauces and seasonings. Evla Pottery is perfect for those who love Minnesota-made art.

Gazta & Enhancements sells local and artisan cheeses – what else could you possibly want?

In Bloom is a fine dining restaurant that cooks everything over fire. K’nack is an old-school butcher counter with smoked sausages, bacon, ham, and charcuterie.

MN Slice is an easy choice for anyone who loves Minnesota flavors. Pimento Jamaican Kitchen serves up Jamaican street food.

Revival Smoked Meats gives a touch of Carolina BBQ right here in the Midwest. Rose Street Patisserie is a one-stop shop for chocolates and caramels.

Worker B has the best raw honey. There is even a carousel outside!