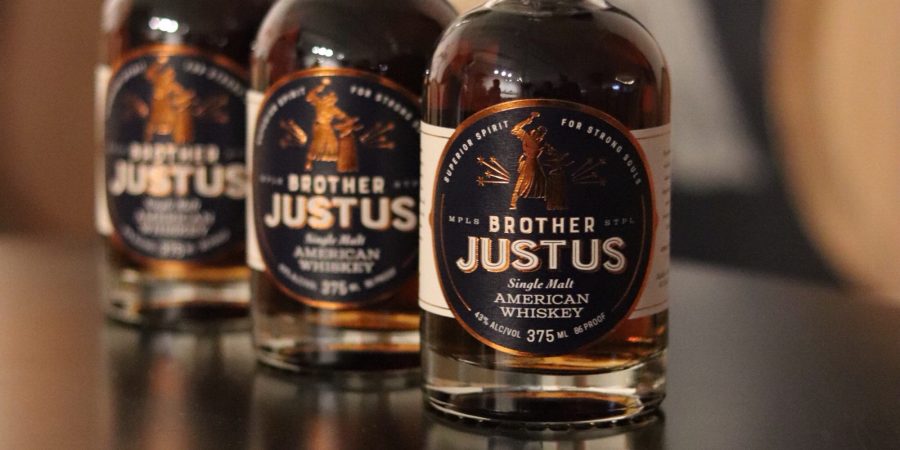 Well, it just got better.

Brother Justus Whiskey Co. is a brand new, underground distillery that promises to put Minnesota whiskey back on the map.

“Back,” you say? Why yes, didn’t you know that Minnesota made some of the best Prohibition whiskey in America? It’s true. Just ask Phil Steger, local Johnnie alum and founder of Brother Justus. Phil found the namesake in the book, Minnesota 13 by Elaine Davis.

During the depression and into prohibition, Minnesota farmers became poverty-stricken. Farmers turned to make moonshine to support their families, often using anything they could to make stills, including old car parts.

Toxicity of the shine ran rampant turning a way to make money into one of misfortune. Blindness, paralysis, you name it.

A Benedictine monk at St. John’s heard this and began making all-copper whiskey stills and gave them away to the farmers for free.

Brother Justus as he was so aptly called, helped create what we now know today as “Minnesota 13” and became a hero to the Stearns County farmers and later to Phil.

Keeping with the Minnesota-made Justus traditions, Phil and his crew are hard at work, using Minnesota-grown barley to create micro-batched American Whiskey in charred Minnesota white-oak barrels. Brother Justus opened in June and is located in the mid-city industrial area off Taft Street. The taproom is open for tastings on Saturdays, 12–5 p.m.

If you are a Minnesota history buff, I highly recommend reading Minnesota 13. I was gifted the book from my grandfather who grew up in Stearns with many of the original Minnesota 13 families. Here is one of my favorite anecdotes from the book: