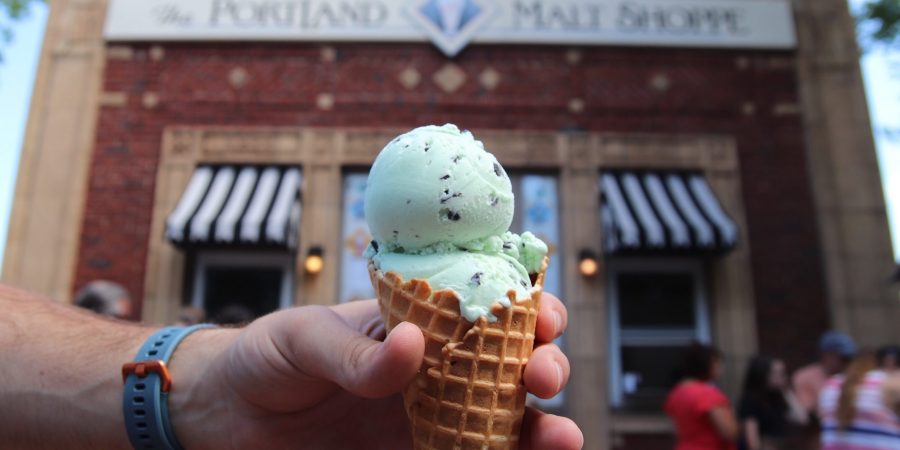 In the heat of the summer, there is nothing better than going in on a massive, sugar-rich dairy treat. Enter, the PortLand Malt Shoppe. Located in Duluth, off Superior Street on the edge of Lake Superior, the freestanding location was originally built in 1921 as a gas station for Northwestern Oil Company.

The neighborhood it is located in used to be a town called PortLand. However, the village postmaster became frustrated when he received mail from several other Portland cities.  His protests were voiced to the village officials.  The officials conferred with their neighboring village, Duluth.  It was decided to merge the two villages and become the city of Duluth. In the 1970’s, the building was purchased for a small dress boutique called the Portland Village. It became a malt shop in 1989, paying homage to the historic neighborhood.

Since then, PortLand has become a North Shore icon. Open from April to October, the old-school window-serve ice cream parlor is well-known for serving 1950s-style malted milk powder malts, shakes, smoothies, root beer and orange soda floats including the famous Brown Cow, a root beer float made with chocolate instead of vanilla. The space is very limited so they can only keep 15 ice cream flavors on hand.

Whether you pile it high in scoops or mix and match in a sundae, they also offer standard fare toppings like hot fudge, chocolate, and butterscotch, with other more interesting options like marshmallow, honey, and coffee. Even with the double waiting line, there is always a crowd so expect a wait. Don’t worry, it’s totally worth it.