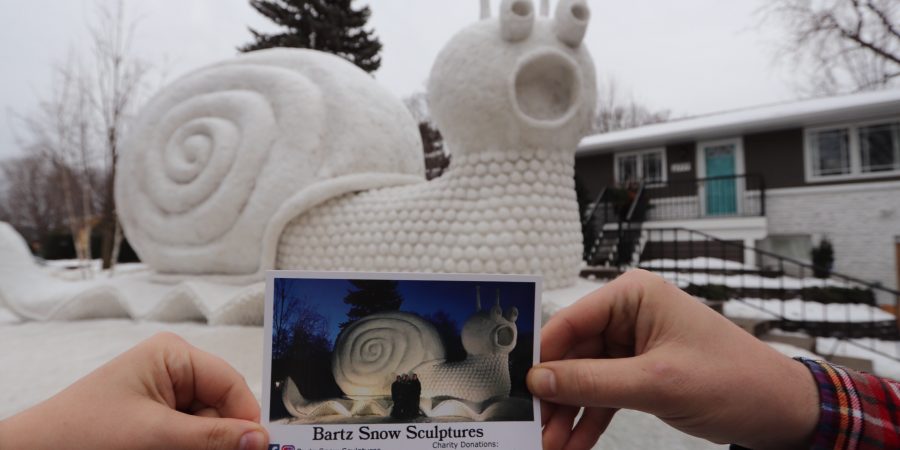 In case you haven’t heard of Bartz Snow Sculptures, let me introduce you. Inspired by a trip to Florida, Austin, Trevor and Connor Bartz began creating snow sculptures of sea creatures in 2012. Their first sculpture was Puffy, a 6-foot-tall Pufferfish.

They have since had Wally theWalrus, Sharky the Shark, Snappy the Turtle, Finnegan the Fish, and last years; Diggs the Lobster, named for Vikings wide receiver Stefon Diggs and his“Minnesota Miracle” catch in the NFL playoffs. This year, the Bartz’s didn’t disappoint. Meet Slinky, a 22-foot-tall, very surprised, silly Snail. It took over 600 hours to make from snow gathered from neighbors, parking lots without salt, and tennis courts. Slinky is the 8th colossal snow sculpture and stands taller than the Bartz’s home! It is a sight to be seen! Passersby have been able to see the gargantuan since it’s unveiling on New Year’s Day.

You can visit Slinky and the Bartz Brothers at 2777 16th St NW in New Brighton. While it is free, donations are accepted for an organization called “One Day’s Wages,” which provides clean water in developing countries. Open 8 a.m. to 10:30 p.m.daily until early February.